The NEW Mall at Laurel 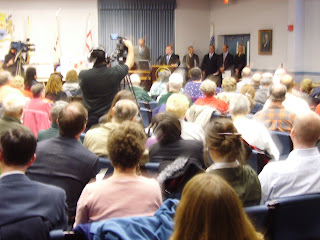 It's not often you get to see the hidden hand of the market. But tonight the market manhandled the old Laurel Mall and proposed transforming it into something totally unique.
A standing room only crowd gathered at Laurel City Hall to hear and see renderings of the new mall. An impressive team from Somera Capital Mgt (developer and owner), AEW Capital (owners), General Growth (leasing and development), and Callison (architect) described the project and provided the back story for the redevelopment.
The developers explained what the community said in focus groups about the old mall and it was not pretty. Dead, dirty, disgusting were the nice words. One person was quoted as saying that the existing mall was a big disappointment for new folks and an embarrassment for the community. After establishing the low water mark, the team turned towards the transformation concept.
The architect presented a slide show explaining how they turned to Laurel's unique history for new design elements. Georgian architectural elements lifted from the train station. Brick facades and stone are reminiscent of Laurel's early mills. Lots of brick, wrought iron and features from turn of the century color palettes. The pageantry of Thoroughbred horse racing lend an air of fun and color to a children's playground.
Mayor Craig Moe introduced the team and explained how the city is committed to redevelopment. Karl Brendle, Laurel Director of Development and the Mayor created a form of land use planning called a revitalization overlay zoning that was one of the first of its kind in the state. The City Council approved the award winning approach by quickly turning it into law. This is the kind of amazing and innovative policy wonk stuff that Laurel does so quickly and well. Mega kudos to the Mayor, Council, Bob Manzi the city attorney, Karl Brendle and the whole city team. Kudos also to the capital providers and developers for having faith in Laurel.
Here is the Leader's awesome same day coverage of this story.
More to come from me but here are the architect's renderings. Please use the comments section for your comments and questions.
UPDATE - I forgot to mention the new 16 screen state of the art movie theatres! 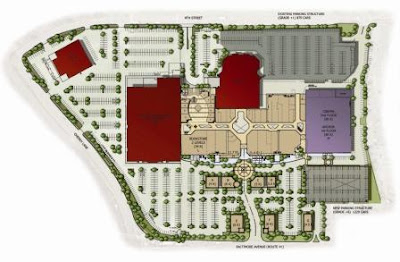 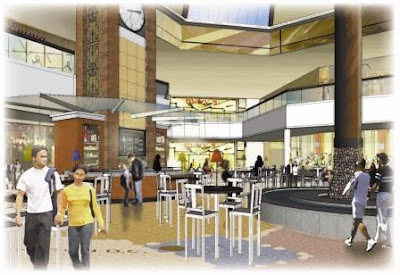 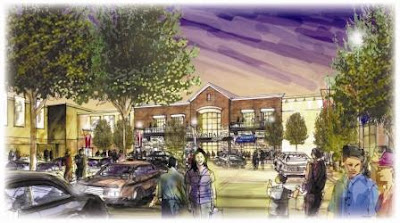 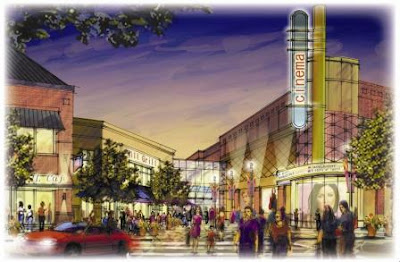 While they did solicit written reactions, I was disappointed that they did not ask for any comments or questions.

I'd like to see a public transportation connection, with the local bus system or a shuttle bus that goes from the train station, up and down Main St, and then over to the new Mall.

I was disappointed that there was no Q&A period.

Given what we have, this is certainly a huge improvement. They clearly made some effort to tie into Laurel's history, which was very nice,

However, there was no discussion of the types of stores they're looking for, what %of current stores are likely to stay, and most importantly, what demographic they are looking to attract (and it's not buy the all ages, economic levels etc!)Sadly, they had no interest in talking with anyone over 40 for their focus groups, FYI -- yet who was at the meeting -- lots of folks over 40!

As a design concept the look of plans are great, but experience shows that what's proposed and what actually goes in in to a location are often very different. I'm cautiously hopeful, but won't cheer til I can go to the theater, visit the good bookstore, and find a nice place to buy clothes.

Sounds good. The key will be the stores. The current mall is disgusting because the stores attract the wrong crowd.

Thanks for the comments. I'll try to get them to the right folks at City Hall.

It's a little worrying they didn't announce ANY tennants.. I mean, if they're planning a movie theater you'd think they'd need an AMC or Loews or whatnot to sign on fairly early. Same goes for this fabled giant bookstore. Sorry to be so pessimistic, but I'll believe it when I see it!

I think folks can safely be a little less skeptical about this project. With all the solidly middle-class to upper-class homes in areas like Wellington, Russett, Emerson, etc, etc, it's hard to imagine the renovated mall -not- being successful.

Given Laurel's location, it's destined to become a major "exurb"/"fringe city" as the region grows. I hope that planners of projects such as this work to increase "walkability" and connections to nearby neighborhoods.

It's easy to envision the work done on the mall's location spreading to the Laurel Shopping Center and the area on the east side of Route 1 to create a major "downtown Laurel". Let's hope that everyone is looking ahead so that the mall project starts things in the right direction.

One of the great strengths of Rick's blog is that it serves as a great way for people to talk about important issues. When I talk to the developer next, I'll mention that citizens wanted a chance at a Q&A and more info on stores. I'm a bit frustrated that we can't reveal stores myself. However, I'm very comfortable with Karl's work on the mall. Perhaps if you have specific questions you can email them to me and I can pass them on or I can have the developers get in touch with Jim & Karen...

As for moving forward, the real hurdles are getting Burlington & the Bermans to officially sign on to the plans, getting a tennant for the old tire center, and getting the demo started on the parking deck...

Very optimistic about the Laurel Mall plans. As a 16-year area resident and Russett homeowner, I'm totally convinced it's a good plan. And reading here from a couple of "insiders" that there really ARE stores interested but they just can't/won't tell us is confirmation. The area's demographics, potential and the city's consistent efforts to use this as a catalyst bode well for the project, the city, and all of us around it that call Laurel home. If these two companies can't fix it, then everyone concerned should give up trying, bulldoze the WHOLE thing down and start over with a mixed use project that the city's overlay zoning will help attract.

I'm excited about the new mall with a theator, being without a car it' hard getting to a theator, either you have the small one in the Laurel Shopping Center or if you want stadium seating you have to take a bus to columbia mall or arundel mills and timetables for these two well arundel mills connect a ride isn't too bad, but columbia stops at 6pm. Well hopefully I'll get to see the Harry Potter and the Half Blooded Prince in the new Laurel Theator. The only thing I hope is that they don't raise my rent too much at the riverview apt. on main street because of all of these changes/renovations..

Listen to our audio interviews